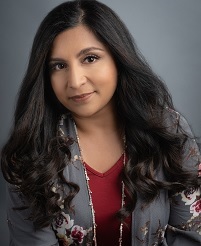 An Indian, born and raised in Kuwait, Shree was always interested in Astrology, Yoga, and Vedic philosophy.  As a child, she was raised in a home environment where astrological principals blended seamlessly into the traditional Hindu customs; everything from the lunar calendar, the manner of running the household, the traditional festivals; all reflected an underlying awareness of the movement of the planets. This manner of rearing, laid down the initial foundation of astrology in her psyche. Years later she became interested in the actual concept behind astrology and learnt there was a lot more to it than the traditional Jyotisha she was exposed to as a child.  In the year 2009, while in Dallas, Shree met Joni Patry whose immense knowledge of Vedic Astrology astounded her .. that was the turning point and there was no looking back .

Shree was trained by world-renowned astrologer and Jyotisha Choodamani Joni Patry who she proudly calls her Spiritual Guru and was certified by UVA in Dallas. She later joined as a tutor at UVA (University of Vedic Astrology) where she teaches an online astrology certification program and is also a featured guest author on Astrologic Magazine. She also has a successful YouTube channel where she shares her knowledge of Vedic Astrology. In an attempt to bring all the Vedic sciences together, Shree recently completed her 200 RYT (Registered Yoga Teacher) certification. The various parallels and connections between Jyotisha, Yoga and Ayurveda continue to astound her and she firmly believes they should all be practiced in a unified cohesion. Spreading this knowledge and helping her clients use these tools to heal themselves, remains her humble purpose.